Bees are amazing animals. With their ability to work together as a single hive, combined with their pollination of plants, bees are important both scientifically and economically. One amazing fact about bees is their compound eyes, which means that though it might seem like there are two, how many eyes do bees have? The answer is more complex than you might imagine, and also could open up new fields of science.

How Many Eyes Do Bees Have?

So, how many eyes do bees have? One might see two large eyes, called compound eyes, that appear to sit on the sides of their head. However, one might also notice that these appear quite different from a human eye. Also, if one looks closely, one might find other circular spots on a bee’s head. Could these also be eyes?

We will answer this question, but first, let us focus on the compound eyes.

What Makes Up a Bee’s Compound Eyes?

Visually, the most obvious eyes on a bee are the two large, compound eyes. Each one is made of thousand of ommatidia, tiny eye parts that are repeated over and over in the compound eye. Each one of these eye parts has its own lens and works as a simple eye.

Information from the eye parts is transmitted to an analyzed by the bee’s brain. 150 of these ommatidia are specialized for detecting patterns. If one considers each of these as an eye, then the answer to, “How many eyes do bees have,” is actually thousands. These thousands of miniature eyes spread out over the sides of a bee’s head, providing a field of view far wider than that of humans. These eyes are excellent at picking up fast movements.

None of these eyes can focus quite as clearly as the eye of a human. This makes sense for bees, which are small and have many predators. A wide visual field allows them to detect threats quickly, while tracking fast objects lets them focus on rapidly approaching predators.

However, along with these compound eyes, bees also have simple eyes.

What Makes Up Their Simple Eyes?

Although much smaller than the large compound eyes, bees also have three small, simple eyes located on top of their heads between the two compound eyes. They are called simple eyes because they have a single lens, as opposed to the multi lensed compound eyes. Bees use these three eyes to detect the sun. Mainly, this is to orient themselves based on the sun, helping them navigate around. However, some bees have enlarged simple eyes to allow them to navigate at night. This helps for bees that pollinate flowers that open at night or in hot climates to take advantage of the cooler nighttime air.

So, what is the answer to, “How many eyes do bees have?” One could say the answer is five, but then one might miss the fascinating details of these eyes.

What Colors Can a Bee’s Eyes See?

Along with having many more eyes, bees can see parts of the electromagnetic spectrum than humans cannot. This becomes useful when bees search for nectar.

While flowers look colorful to humans, they also have areas that reflect ultraviolet light. This allows flowers to form a target or a runway to attract bees. For example, flowers can reflect ultraviolet light around where their nectar and pollen are located. Bees remember this visual cue and return to this area for nectar, which also pollinates the flower.

Along with this, bees can see polarized light, giving them another ability beyond humans. This ability comes from the 150 specialized ommatidia. These specialized parts allow bees to navigate using the sun on cloudy days. Since sunlight creates a particular polarization pattern that shows the location of the sun, bees can use the sun’s position for navigation even when the sun is hidden behind clouds.

What Does the World Look Like to a Bee?

Bees have a much wider visual field than humans. Also, with the ability to see ultraviolet and the lack of red, colors would appear quite different. Finally, their compound eyes do not focus nearly as well as a human’s eyes. This creates a wide, blurry field of altered colors. But in this blur, ultraviolet would stand out noticeably. So, as a bee flies around, its eyes would be drawn to areas reflecting ultraviolet, which just happen to be areas with nectar and pollen. At the same time, the wide visual field makes it hard for anything to sneak up on a bee without being detected.

In this sense, the answer to “How many eyes do bees have?” would be thousands, because each piece of a compound eye provides a different piece of information. Of course, this requires a bee’s brain to process an enormous amount of information.

How Does a Bee’s Brain Interpret So Much Information?

With so many eyes and a wide visual field, a constant flood of information flows to a bee’s brain. Not only can their brains hand this, but with extremely fast neuronal processing, the brains of bees can comprehend 300 different pictures in a second, allowing them to track fast moving objects. Humans brains can only comprehend around 65. By comparison, most movies play at 24 frames or pictures per second, and human eyes and brains see this as smooth motion. Bees do not have a large head or brain, with slightly less than a million neurons. So, how do they process all this information?

Bees accomplish this task with specialization. Neurons are specialized and synapse with nearby neurons, allowing tasks to be divided into different parts of the brain. With this specialization, a bee can accomplish a complex mental task, such as processing all of their visual information, that would otherwise require a much larger brain and many more neurons. Thus, bee’s brains are very efficient with their use of neurons, and they process and function with incredible efficiency.

What Have Researchers Learned by Studying the Vision of Bees?

Because bees see the world so differently from humans, researchers investigate this field for novel approaches to today’s visual problems.

A scientist in Australia did this by creating a camera that shoots through a collection of straws, turning an image into many small individual pictures. Color filters can simulate the lack of red and addition of ultraviolet. Finally, a computer can stitch together all the individual pictures, creating a blurred image with ultraviolet and without red.

Now that one can see like a bee, one can attempt to process information in the same way. The brains of bees utilize a lot of neuronal specialization to efficiently process information and solve tasks. By better understanding how bees do this, researchers can formulate new algorithms on vision and other tasks.

One possible avenue for this research is to aid with facial recognition. Current algorithms find it hard to identify faces from a different angle. If a person were to turn their head to the right, the picture shot by the camera would change and many algorithms would identify this as a new person. However, a bee’s visual system, with its specialized neurons, solves this and other problems in different methods from how human brains work. By using these methods or modeling them, software engineers may formulate new insights and solutions to problems of facial recognition and beyond.

The answer to the question, “How many eyes do bees have?” can be five or it could be thousands. Along with three simple eyes that track the sun for navigation, bees have two large compound eyes, each with thousands of tiny eye-parts called ommatidia. With these eyes, bees can see a large area, and also process visual information for this large area at a much higher frame rate than humans. Aside from most visual light, bees can also see ultraviolet and polarized light, allowing them to identify the parts of flowers with nectar and to navigate in different light and weather conditions.

Since this is so different than what humans see, the brains of bees work differently than humans. A bee’s brain is also very specialized, allowing it to perform tasks efficiently, using far fewer neurons than a human brain would require. By studying these specialized solutions and efficient modifications, scientists may find new solutions to computerized visual challenges like face recognition. So, the common bee, which astounds people with their cooperative hive mind and importance for plants and agriculture worldwide, may also guide the development of new technology and computers. 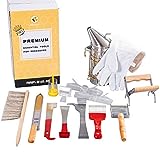 Beekeeping for Beginners: How To Raise Your First Bee Colonies
Buy on Amazon
Bestseller No. 3 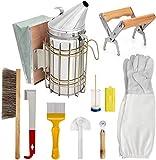 Want a Job as Sweet as Honey? 5 Sticky Tips for How to Become a Beekeeper