Though mason jar beehives have been in use for decades, they have become more popular in recent years, due to some stirring photos circulating on social media.

These photos show images of bees busily at work on hives inside the clear glass jars, or of jars filled with rich golden honey, complete with visible comb floating within. Compared to the vertically stacked, dingy boxes of commercial beekeepers, it's an attractive and interesting image.

Unlike most other beehive models, the mason jar hive is most often a DIY project. You can easily make one using materials picked up at any home supply or hardware store. If you're interested in this kind of DIY hive project, read on. We'll look at the specs, the cost, and how mason jar hives stack up against other beekeeping options.

A mason jar beehive is pretty much what it sounds like: a beehive using mason jars for the bees to build their honeycomb in. As a DIY project, it's simple, and requires tools most people already have at home. You build one in a few simple steps.

The result is an interesting and attractive hive for bees. As a project, it combines aspects of a functioning beehive with some of the best parts of that ant farm you had as a child. This makes the mason jar beehive especially attractive to parents and grandparents.

Because mason jar beehives have attained a level of popularity, you can now buy construction kits instead of opting for a complete do-it-yourself option. The simplest kits come with the jars, wood, and hardware needed for construction. More expensive options range up to including parts for an attractive frame to keep your hive in. 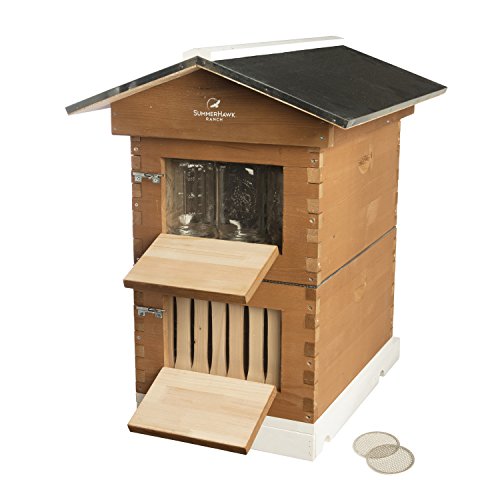 The glass mason jars work just as well as other confined spaces for bees to build their hives in. When it comes time to harvest your honey, simply remove the jars. Keep the comb inside, then top it off with honey from other parts of the hive.

Professional beekeepers who have used this method report being able to sell mason jar hive honey at a premium because of the novelty of it having comb built inside. Hobby beekeepers like these hives because they allow easy viewing of the bees at work.

Maintaining a mason jar hive takes some extra work as compared to the more traditional model as you have to access the jars individually. The expansion is relatively easy at first as you simply add more opened jars to the existing board. Once you run out of space, it becomes more difficult and requires constructing a new hive from scratch.

Some users of mason jar hives have reported frustration with the jars moving too much or coming free of their holes. One solution for this problem is to mount the lid rings of the jars to the wood using a screw. You can then screw in and unscrew the lids for more secure mounting.

Unlike other kinds of hives, a mason jar hive requires no specialized equipment and is easy to purchase. You need a piece of exterior-grade wood, available at any hardware store from $15 to $20.

The mason jars are available for $1-2 each at your supermarket, and for cheaper than that online. Final pricing will be a matter of scale. For example, a 12-jar hive would cost $12-24 for the jars, plus $10 for the lumber. Add $5-$8  if you need to buy a bore drill bit.

If you opt for the commercial kit option, expect to pay around $200 for a basic model. More ornate models with frames or a "beehouse" cost $200 or more.

To give you a complete picture of how a mason jar hive stacks up, we've chosen a few other styles of hive for comparison. Let's look at a mason jar hive, a Langstroth hive, a Warre hive, and a top-bar hive. All three are common models of commercial hive used by professional and hobby beekeepers. 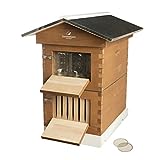 When you think about a commercial beehive, you are most likely thinking of a Langstroth hive. Those stacks of wooden cubes you see next to farm fields are Langstroth hives.

Inside them are a set of rectangular wooden frames, to which the bees anchor their comb. Langstroth hives are the most common kind of hive used in North America and Australia.

What sets apart a Langstroth hive is the internal moveable frames. Each resembles a picture frame, with the bees building the honeycomb inside the frame.

Comb built with the support of the frame is more stable than with other models, which makes the Langstroth hive less likely to break during inspection or when being moved. This is why commercial beekeepers (who often rent their hives to farmers, moving them from the field to field) prefer the model.

On the other hand, the frame environment bears the least resemblance to where and how bees built hives in nature. This can lead to health problems for the bees, meaning that Langstroth hives require more maintenance than other models. However, the design was built for humans so that maintenance is easier to perform.

Langstroth hives require little maintenance other than expanding space as the hive grows too large and reducing the hive's size in winter when the bees aren't active.

You can expand a Langstroth hive by either "supering" or "nadiring." Supering a hive means adding a box to the top of the hive so the bees can move upwards. Nadiring means adding the box at the bottom so that the bees can build downward.

From the outside, a Warre hive looks very similar to a Langstroth hive: wooden boxes you can stack containing space for bees. The difference is the interior.

Instead of a rectangular frame, the Warre hive has a set of bars set horizontally at the top. Bees build their hives on the bars, just as they would on a branch or roof eave in nature. This creates a more natural environment for the bees.

This style of hive is named after the monk who invented them, Abbe Emile Warre (pronounced "WAR-ray"). A beekeeper at his abbey, he studied hive styles by the dozen until designing this model to both simplify management and give the bees a natural environment.

The result produces more docile and productive hives than the Langstroth model though this bee-friendly design makes some aspects of beekeeping harder on the humans.

The natural environment means the hives need little to no maintenance other than harvesting, expanding, and contracting the hive.

However, the free-range bees have within the Warre hive sometimes leads to comb being attached to the walls or even the lid of the box. This can make the maintenance and harvest (however infrequent) more difficult than with other models.

A top-bar hive works horizontally rather than vertically. They have a wide trough, with wooden bars set along the top on which the bees built the comb.

Where Langstroth and Warre hives look like wooden file boxes, a commercially produced top-bar hive looks like a wooden barbecue with the "grill" a set of wooden bars. The beekeeper can remove each bar to inspect or harvest from each comb.

Top-bar hives were the first kind of man-made hive, with archaeological evidence showing we used them as early as Ancient Greece. They remain the most commonly used style of hive worldwide.

This old-world model also means you can operate one without buying the expensive equipment and accessories needed for newer commercial models.

One unique aspect of a top-bar hive is its larger space for hive-building. In early stages, the hive requires a divider board. This is a thin piece of wood that separates the space for the hive from the rest of the cavity. As the hive and comb grow, the beekeeper moves the divider to give the bees more space.

Generally, manufacturers recommend leaving three "bars" of space between the body of the comb and the divider board. In winter, as the hive body diminishes, move the divider board back. You will have to monitor the hive more frequently than with box hives, but the design means that monitoring is substantially easier.

Note that while commercially produced top-bar hives can be the most expensive model, DIY plans for very inexpensive versions are easy to find in beekeeping resource websites and forums.

A mason jar beehive is a novelty, and is enjoyable to observe. However, it has issues of weight and scalability when compared to more standard beehive models. We rate this a 4-star for hobby beekeepers, but a 2-star for professional and commercial operations. If you want to turn a profit from your beekeeping, this is a suboptimal option.

We would also rate a mason jar beehive as a 5-star project for parents or science educators. From the building of the hive to watching and measuring the honeycomb grow, to observing the bees, to harvesting the honey, this is a "honey" of an opportunity to help children learn by becoming involved with nature.